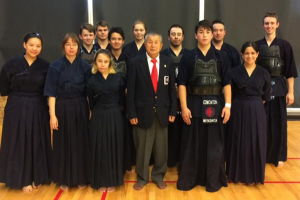 This past week the Edmonton Kendo Club sent 12 members to Markham, Ontario to participate in the 19th Canadian National Kendo Championships. The championship is held every three years so this occasion was a rare opportunity to show our club's progress on a national stage. What made this event extra special was the inclusion of senior (50+ age) and provincial tournament divisions. Edmonton was able to field a full roster of players for each division, as well as provide the majority of members for the provincial teams:

Never before has Edmonton sent this many members to a national event. Moreover, this is the first time Edmonton has placed at the Canadian championships. Below are the result highlights:

All in all, the Edmonton club made an excellent mark on Canadian kendo at this event. It was a lot of hard work by all team members and they all have much to be proud of for their accomplishments!